Today in your PSSM stories we hear from one of our admins Rebecca, and her PSSM story with her Cob x Hackney Mare Ditsy.

My name is Rebecca, and PSSM is a very important topic to me. Ditsy my Cob x Hackney mare was diagnosed with PSSM1 in June 2017.

It was a few days after Ditsys 7th birthday- there was no warning when Ditsy had her first tie up, nothing prior leading up to it. We went competing one weekend, she had Sunday off to rest and Monday after warming up and starting the work phase of her routine, she suddenly felt lazy and began dragging her back legs.
I immediately dismounted wondering what was wrong with my horse. She was trembling all over and seemed unsteady, I had never seen this before and my instant thought was that she was having a heart attack or seizure. Ditsy was unable to walk properly and it took a good hour to get her into her stable that was only a few steps away. Once in the stable she began vigorously pouring the ground, wanting to roll but she couldn’t, it looked like she had colic but I could see all her muscles twitching and cramping like worms were under her skin it was terrifying.

The vets came out within the hour, by this point Ditsy had settled and was extremely tired and lethargic. The vets took blood tests and made me trot her up, which now I know was the completely wrong thing to do- Ditsy was diagnosed with suspected laminitis I was told to box rest her for 6 weeks.

Those 6 weeks of box rest was torture, Ditsy wasn’t getting any better in fact she seemed to be getting worse despite following vets instructions. Muscle and weight was falling off Ditsy by the day and she looked like a bag of bones, this wasn’t like any laminitis case I had seen and I was unable to stand there and watch my horse suffer any longer so I took it upon my self to dig deeper.

After nights of spending hours researching I stumbled upon something called PSSM, as soon as I saw it I knew this was what was wrong with my horse and everything suddenly started to make sense. I immediately rang the vets and voiced my concerns but they had had no clue what PSSM was and when they did look into it they said it was highly unlikely I think this is because PSSM is only said to affect quarter horses which is entirely false. In the end to request for Ditsy to be PSSM tested I had to write a formal complaint to the vets demanding the test.

The complaint worked and the following day the vets came to take bloods- later that week my gut feeling was confirmed Ditsy was diagnosed with PSSM1.

Diagnosis was the first step, but PSSM management was when the the hard work really started. After diagnosis vets couldn’t advise me on how to manage her as it wasn’t something they had come across before. The vet dealing with her case hadn’t long been qualified so I asked for the head vet to deal with Ditsy in future as he had a small amount of knowledge on the condition but had only ever seen one case in all his years being a vet.

The head vet came every two weeks in the beginning to take Ditsys bloods, they would test the CK levels to see if they were raised, when CK levels are raised muscle damage is occurring and we think Ditsys were high for so long it resulted in muscle wastage which is why she lost so much weight and topline, it took a long time to get them to gradually come back down again.

Once Ditsys bloods were at a normal level management began, that in itself was a very rocky road with lots of trials and errors.
Firstly we had to find the correct diet for her, not all horses are the same in terms of what they can manage but after lots of testing her with different feeds we found she couldn’t manage balancers at all, nor haylage, nor grass all made her symptomatic.

We brought ditsy back into work gradually, starting with in-hand walking up to ground work, we found pole work really helped a lot with helping engaging through her back. She was worked 6 days a week with a day off for loose schooling, we went on to have many fun days showing , jumping, beach trips and even went to Somerford Park.

2 years on after diagnosis Ditsy is back to being as much like the old Ditsy as possible on the exercise and diet plan above.

Unfortunately Ditsy had to be retired in April 2020, not because of PSSM however but because she was kicked quite badly which progressed into injury inflicted arthritis in both of her elbows, she also developed corpora nigra cysts meaning she has limited vision with her eye making her extremely spooky, we were also told she may also have the start of kissing spine too after over £10,000 in vet bills it was decided it was best to retire her. Ditsy is doing well with her PSSM and still managed with diet and we also do ground work to ensure she is getting as much movement for her PSSM and arthritis.

When Ditsy was diagnosed with PSSM I felt I had her stolen from me in the blink of an eye, but even if they cant do what they used to with management most PSSM horses can still have quality of life.

Our ridden journey is over but our PSSM journey still continues and I will continue to raise awareness on PSSM for horses, owners and whoever else I can because no one deserves not to have answers and left wondering how to get their old horse back.

Both ditsy and her sister have PSSM both are by the same mare. This is why I feel if you are a breeder it’s so important to do a hair strand test or blood test for PSSM as there is more and more affected horses coming to light. Testing before breeding can save a lot of heart ache for owners and give horses a better future. 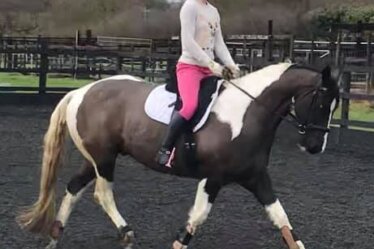 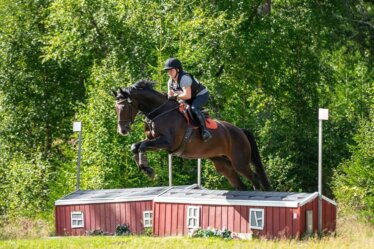 Help support us! By purchasing any of the products from our store. Dismiss